Marshall Islands, US, Denmark and Kenya call for zero emission shipping by 2050, during UN Ocean Conference

Speaking at the high-level opening of the 2022 UN Ocean Conference, co-hosted by the Governments of Kenya and Portugal, from June 27th to July 1st, UN Secretary-General warns "We cannot have a healthy planet without a healthy ocean".

Many people were thrilled to hear the Marshall Islands, United States, Denmark, and Kenya’s pledges to decarbonise international shipping. After all, this is a sector responsible for 2.89% in global GHG emissions in 2018 (1,076 million tonnes) according to the Fourth IMO GHG Study 2020. If treated as a country, international shipping would be the eight largest GHG emitter in the world.

Back in 2020, the United States supported – along other like-minded countries – draft amendments to the MARPOL Convention Annex VI that would require existing ships to combine a technical and an operational approach to reduce their carbon intensity. The amendments were finally adopted in 2021, amidst experts criticism for its weakness and consistency with holding warming between 3°C and 4°C, instead of 2°C and 1.5°C as stipulated in the 2015 Paris Agreement and today the United States has a new policy approach to climate change.

Kitlang Kabua, Minister of Foreign Affairs and Trade of the Republic of the Marshall Islands, whose country is a leading voice for climate action at the UNFCCC and the IMO, opened her statement highlighting "the urgent need for an equitable transition to zero emission shipping well-before 2050". She also affirmed that for many years the Marshall Islands, among many of their Pacific allies, have been pursuing a zero emission by 2050 objective at the IMO and that they are finally beginning to see some progress. She concluded by urging IMO Member States to adopt at the 80th session of the IMO’s Marine Environment Protection Committee (MEPC 80) a Revised IMO GHG Strategy:

"[…] that puts the international shipping sector on a 1.5 degree aligned trajectory. To do this the revised strategy must mandate the complete elimination of all greenhouse gas emissions from the shipping on a full lifecycle basis and with no offsetting by 2050 at the latest". 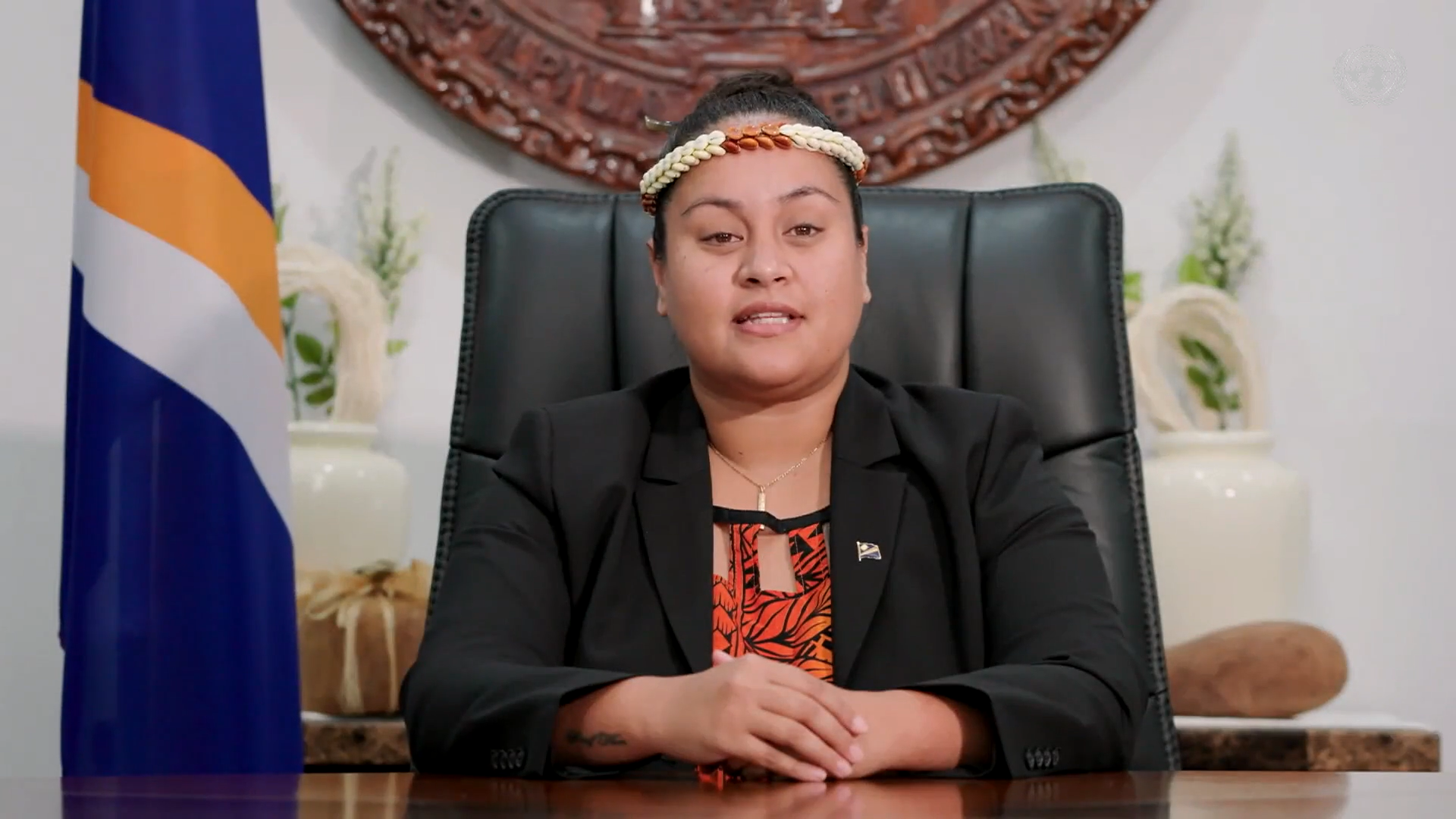 The same year that the IMO adopted the amendments to the MARPOL Convention Annex VI to cut the carbon intensity of existing ships, Kiribati, Marshall Islands and Solomon Islands put forward a Draft Resolution on zero emissions no later than 2050. With no consensus in the Plenary, lacking support even from those who spoke on the need for strong climate action at IMO, the Resolution had to be converted into a statement that was appended to the final report of the MEPC 77.

Politics is not the only barrier to tackle climate change, as an increase in the Levels of Ambition also depends on the understanding of some terms. For instance, "net zero" is only appropriate when expressing efforts by countries to reduce national emissions, as countries have the opportunity for both mitigation of sources of GHG emissions and development of GHG sinks (associated with land use and carbon sequestration processes), whilst "carbon neutrality" only encompasses carbon intensity reductions and the international shipping sector does not only emit CO2 emissions.

Shipping as a sector has only sources of GHG emissions not sinks, explains recent study, validating the Marshall Islands and US pledges to adopt the goal of zero emissions by no later than 2050. In the case of Pacific Small Island Developing States (SIDS), their delegations often struggle to attend IMO negotiations but they do so because there is no plan B for them in a scenario where the world fails to adopt stringent policies to reduce global warming.

Another IPCC report published this year posits that small islands face an existential threat if global warming rises above 1.5°C. This calls for urgent and ambitious reduction measures across all sectors, including shipping. "The IMO must put a stable and predictable price on shipping emissions at the level that drives the necessary uptake of low- and zero-emission fuels".

"We must ensure the resulting revenues deliver an equitable transition to zero emission shipping and climate resilience in developing countries, including driving investment in renewable electricity generation for the production of zero emission fuels and other uses", Minister Kabua said.

Apart to the current negotiations on the Revised Strategy, the IMO is currently in the process of assessing and selecting proposals on new/innovative emission reduction mechanism(s) to incentivize GHG emission reduction. These could include a proposal by the Marshall Islands and Solomon Islands for the establishment of a universal mandatory GHG levy with an entry level by 2025 of USD$100 per tonne with upward ratchets on a review cycle every 5 years, and a revenue use for in-sector and out-of-sector climate actions in developing countries, particularly SIDS and LDCs.

The Pacific GHG levy has received support from several IMO Member States and Observer delegations. It has also received positive considerations by the UN Special Rapporteur on Human Rights and the Environment and UNCTAD representatives, giving hope to Pacific Islands who contribute the least to global emissions and yet are severely affected by them.

Dr. Jan Hoffmann from UNCTAD – a UN an advisory body on trade and development affairs within developing countries – spoke at a side event of the Ocean Conference, pointing out the "need to establish a transparent and predictable financing and pricing mechanism" to put a price to carbon in the shipping sector. According to calculations the levy proposal by the Marshall Islands and Solomon Islands could generate USD$72 billion per year, he added.

The Conference’s main outcome is the declaration "Our ocean, our future, our responsibility", which calls to "reduce GHG emissions from international maritime transportation, especially shipping, as soon as possible" and to adopt a Revised IMO GHG Strategy with strengthened levels of ambition that are aligned with the Paris Agreement’s temperature goals.

Aideé Saucedo Dávila is a researcher at University College London’s Energy Institute and a climate negotiator for Tonga at the UN International Maritime Organization. Twitter: @aidee_sd

The 78th meeting of the Marine Environment Protection Committee at IMO in London concluded on Friday with growing consensus for a basket of measures, including the RMI/Solomon Islands GHG levy proposal, and increased ambition of at least 100% reduction in GHG emission targets by no later than 2050. Almost without exception, all delegations referenced the Pacific call for an Equitable Transition – one that leaves no state behind.

An intensifying negotiation timeline until MEPC80 in July 2023 has been set with three Inter-Sessional working groups confirmed and we are now planning to have full Pacific high ambition representation at all these face to face meetings over the next 12 months.

MEPC80 is the deadline for agreeing the Revised Strategy that will guide shipping’s decarbonisation agenda for the foreseeable future. At stake now is the disbursement of revenues, potentially trillions of dollars over the next 25 years, and how much will come to resourcing the adaptation and loss and damage needs of the climate vulnerable and how much will be spent subsidizing in-sector industry transition.

A disciplined and well-coordinated Pacific high ambition coalition continued to hold firm on the lines of 1.5 throughout MEPC78, ensuring the overarching concepts of Equitable Transition, Highest Possible Ambition and the Polluter Pays Principles are well embedded in the negotiating agenda.

For a summary of MEPC78 outcomes, please see this analysis from our colleagues at UMAS.

Pacific High ambition comes out strongly insisting the decarbonising of the shipping sector equitably. At the IMO there are currently 6 Market Based Measures proposals to be discussed this week for MEPC78. Our Pacific high ambition coalition continues to benchmark the RMI/Sol $100 tonne levy which the World Bank values at over $1.6 US Trillion which underscores the need for equitable transition and that none is left behind.

The IMO finally moves to debate Market based Measures: RMI, Solomon Islands, Tuvalu call for Equitable Transition ahead of ISWG12

In a defining submission ahead of IMO's crunch 12th Inter-Sessional Working Group on GHG emissions in May, the sponsors call for the massive revenues that will result from a GHG price on shipping, to finance an equitable transition that leaves no country behind.

The Marshall Islands, Solomon Islands and Tuvalu, the most climate vulnerable nations on earth, are spearheading a drive to raise ambition at the International Maritime Organisation and ensure the resulting shift to non-emitting technologies and fuel benefits all. In 2020, RMI and the Solomon Islands proposed a GHG levy with an entry level price of $100 GHG-equivalent. Since then, other coalitions have proposed other market-based measures, including different levies and variations of emission trading schemes.

There is now general agreement a strong carbon price and market signal is essential if shipping is to rise to the 1.5-degree challenge.  At ISWG-12 in May, member states will finally begin to seriously negotiate the future shipping market-based measure. For it to have any value in keeping global warming below a 1.5-degree temperature threshold, the measure will need to send an unequivocal signal that shipping is decarbonising now and will be fully GHG free by no later than 2050.  If the market does not respond adequately, a command measure, such as a stringent fuel standard, will be also be required. Anything less is simply playing around the edges of what is needed to save the climate vulnerable countries from the current existential threat.

The scale of the market-based measure now needed will generate greater revenues than is currently required by the shipping sector to decarbonise. The World Bank is conservatively estimating that the revenues generated could be in the order of $60 billion p.a. initially.  This submission from the Pacific calls for an "Equitable Transition" to be the basis for determining the allocation of such revenues among IMO member states.