What is the MCST and where did it come from?

The Micronesian Center for Sustainable Transport (MCST) is a unique program and approach to addressing the need for Pacific states to transition to low carbon transport pathways.  The MCST Framework sets out a structured fifteen-year program to achieve this by first aiming to achieve such transition in one country, Marshall Islands, and then use this as a catalyst to cascade successful results to neighboring states and outward through the region.

MCST provides a space for willing partners to collaborate on research, analysis and implementation of practical projects within a common program under this Framework. In many instances, the MCST formalizes and consolidates already existing research and project networks that have been active in this space now since 2013. We welcome all those who have been our active supporters and collaborators to date and invite new partners to join this circle. With its physical home at the USP Long Island Campus in Majuro, this MCST knowledge portal is a virtual Center of Excellence providing connectivity between a number of related international programs and our work here in the Pacific on low carbon transport transition.

The MCST was the brainchild of the late Hon. Tony de Brum and brings together two related strands of work:  RMI’s work on NDCs and international shipping targets and USP’s Sustainable Sea Transport Research Program. 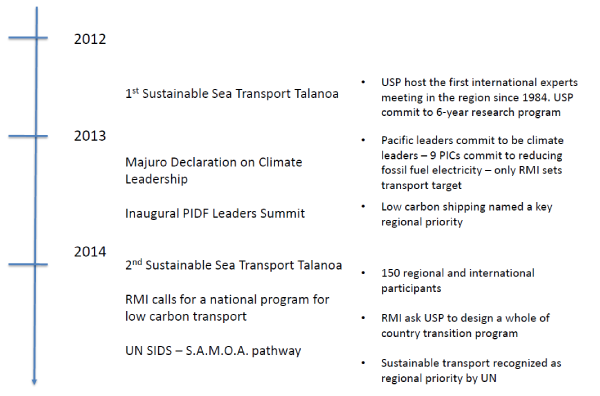 The first of these began with the RMI government commitments under the 2013 Majuro Declaration on Climate Leadership and was followed with the Nationally Determined Contributions (NDC) that RMI has committed to under the 2015 Paris Agreement on Climate Change. These national actions are complimented in the international arena by the work RMI and other likeminded Pacific states have committed to under the IMO Shipping Emissions Reduction Roadmap. RMI and its partners, with technical support from USP and UCL, have been active participants in this process since the RMI sponsored submission to IMO’s MEPC68 in 2015 which called for international shipping to adopt a sectoral target for emissions reduction commensurate with a no more than 1.5-degree Celsius global warming limit.

RMI is the first Pacific Island Country to set an unconditional NDC target for national transport emissions reduction (16% by 2025/27% by 2030).  Achieving this target is expected to also deliver improved connectivity for Marshallese and Pacific communities through access to more appropriate and affordable low carbon shipping options.  RMI and USP have established the MCST as the primary tool for achieving RMI’s Transport NDC targets and as a catalyst for regional transition. RMI’s national low carbon transport transition strategy is set out in the MCST Framework. 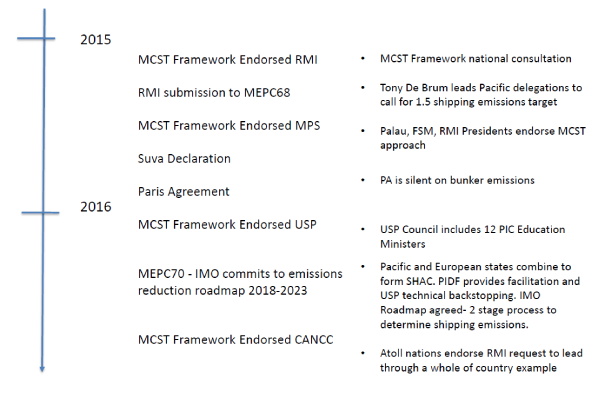 The second is the Sustainable Sea Transport Research Program that USP established as an outcome of the 1st international Sustainable Sea Transport Talanoa (SSTT2012). The SSTT 2012 was the first regional workshop on this subject since 1985 and was repeated in 2014 (SSTT2014). USP’s research program has since contributed ground breaking research into various aspects of Pacific low carbon shipping transition with a number of leading international research centers.  In 2014 our network was the only one actively working in the field of low carbon shipping in the Pacific. The RMI government requested USP to establish a Center of Excellence in Majuro as an engine to drive their national and international efforts on low carbon transport transition and this was formalized through the USP Council in 2016.  In 2017 USP announced establishment of the MCST as one of its voluntary commitments to the first UN Oceans Summit in New York.

In 2015 UNCTAD requested USP to prepare an online interactive toolkit of information, knowledge and research to support decision-makers, policy writers, planners and researchers in Small Island States pursing low carbon shipping agendas. USP won the Shipping Industry Innovative Research Award at the 2016 Shipbuilding, Machinery & Marine Technology conference in Hamburg in recognition of our research record. Today, MCST collaborates closely with partners and colleagues in several leading research programs in this field around the world.  Papers, reports and presentations from this ever-expanding collaborative network can be found on the Resources Page. 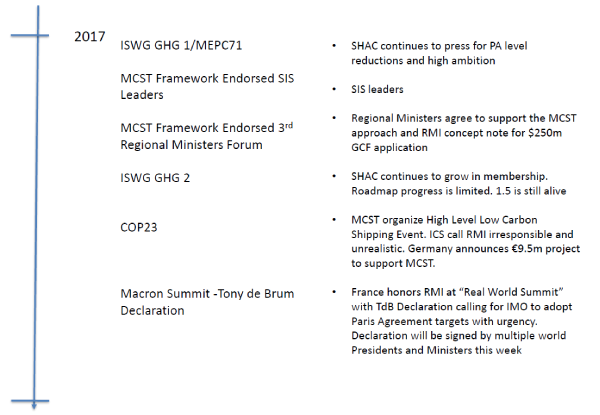 MCST extends an open invitation to all who wish to assist us achieve the ambitious targets RMI has set.